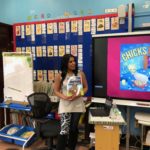 We were so lucky to have Sudipta Bardhan-Quallen visit with students at PS 72 in East Harlem last month. She had the students laughing, asking questions, and excited to tell their stories. 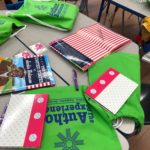 The students all received a bag full of books and a writer’s notebook—including Chicken Squad by Doreen Cronin, Bad Guys by Aaron Blabey and The United Staes v. Jackie Robinson by Sudipta Bardhan-Quallen.

Some students began reading right away, while others began writing in their writer’s notebooks. This student was maybe starting a biography about Sudipta?

One student said to another student while looking at the books in his bag, “This is magical.” And I would agree. After Sudipta met with the students she spent some time talking with parents about the power of sharing stories. The parents even received writing notebooks and had a chance to begin their own stories, (which will be a topic in another post).   A truly “magical” afternoon.

Do you want to be part of the story too? 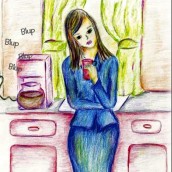